I work on papel or canvas rolls. Drawing and painting, I tell stories, tales. These last years, I am focusing on my environment : I choose a theme, I study and explore it and change words into paintings where  characters, maps, symbols mingle freely.

There is the omnipresent idea that each canvas supports long stories or results of research, and can be cut and shared with those who want to capture a part of these adventures…

I cut the canvas for you.

I do paint very large format canvas, you choose your own piece of the canvas, I tailor cut it to your liking.

Therefore, your particular piece is a unique part of the whole original story

1. The spectacle is about to begin : be ready! In an alcove , a couple in love. Behind the man, the Fool. The Fool is wise, nonchalant and audacious : he reveals new courses.

2. An acrobat appears, accompanied by eight figures. Everyone wants to know about the new love story. The Fool, the super secret spy who knows everything, is going to tell it.

3. Seven small dark clad characters arrive running. In choir, they read the dramatic parchment : Marinette is returning from a journey during which she served her Mistress. She crossed mountains, travelled nights and days… And, always protected by the Magician, she run into a travelling theater company.

4. Marinette learned many things with the actors and wished to warn women: in every village she passed by, Dom Juan had already been there, always leaving lovers behing him.
5. And Marinette noticed that disillusioned women returned to their boring lives… Dreaming of Dom Juan showing up again.

There is the omnipresent idea that each canvas, supports long stories and
can be cut and shared with those who want to capture a part of these adventures …

I was born in France and I studied art at the Ecole Régionale des Beaux Arts in Caen (Normandy). I was 25 years old when I went for the first time to Brazil. I lived for 2 years in Pindamonhangaba (São Paulo State) and in 1988, I moved to Lisbon where I stayed for several years. After a time back to France, I chose in 2002 to live in Brazil again.
About my work : at the beginning, there is a text, a short story, or a result of research… which I draw and paint on paper and canvas rolls.
Small and big characters start appearing, and numerous colors. Some made up or not maps or towns, symbols start filling the scene… the initial scenario becomes a tale, then transforms into a journey which offers different allegories and various paths.
And then, those rolls – which can measure up to 8 feet high and 98 feet long – are cut into fragments according to people’s choices and desires. Each person can choose the part they like the most or connect to; regardless of size. Then, these new artwork pieces start a life of their own and give birth to a new story made by people who chose the pieces.
The games and objects I criate are inspired by the paintings.

“In my paintings, I tell stories and then, I change the stories into objects.
These objects work like games governed by rules never quite clear, and often related to chance.” 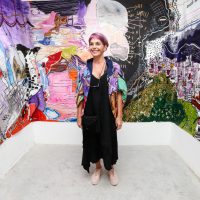 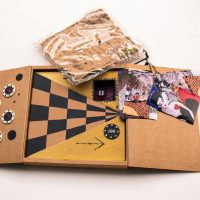 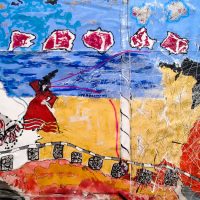